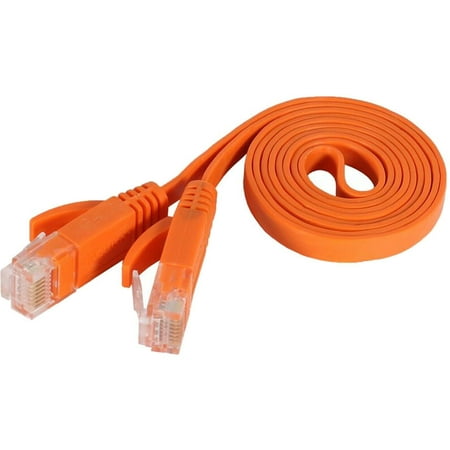 Fosmon RJ45 Cat5e Flat Tangle Free Ethernet Patch Cable This cable connects computers to network components in a wired Local Area Network (LAN). It is safe to put under carpeting, and intended for use in the home or office, this Cat5e cable meets more stringent standards than conventional Category 5 cables and is capable of transmitting data at speeds of up to 1000 Mbps (or to 1 Gigabit per second).Intended for Wired Home and Office Networks The speed and quality of a wired LAN is largely determined by how fast data is transmitted between computers and network components. The cable's RJ45 connectors offer universal connectivity to computers and network components, such as routers, switch boxes, network printers, and network attached storage devices.Built For Superior Network Speed and Reliable Connectivity The Cat5e Ethernet Patch Cable features RJ45 connectors with gold plating for accurate data transfer and reliability. This cable is capable of transmitting data at speeds of up to 1000 Mbps (or 1 Gigabit per second). The faster the speed of your connections, the greater your network's ability to stream video, music, and other data that require high bandwidth. (Please note that your network's speed is determined by many factors in addition to the cables, including your router, switch boxes, and components.)